Ideas are great, especially if you are trying to make your own app or business.  But ideas are useless if they are never executed.  That’s why I want to explain the process I took with 15switches to hopefully inspire you to complete your ideas.

Brainstorming is super important.  As soon as you have an idea, brainstorm as many different ways of completing your idea as possible.  Think of different layouts, different marketing strategies, basically just think of as many paths to your idea as possible.  And then choose which path is the best for you and continue from there.  This is so important because the last thing you want to do is run with the first path you find and then end up realizing halfway through that it doesn’t actually take you to your goal.

No, you’re not holding anyone hostage, but writing down your demands is very important.  Keeping a list of requirements just in your head might be tempting, but it would be easy to lose track of your end goal especially if your brain is as crazy as mine is.  So keeping note of a few very specific things you would need to see in your project will not only keep you grounded, but will also not overly restrict your creativity in the steps to follow.  The list I made for 15switches included things like

3. Get a Clear Picture

After you brainstorm and solidify the main tenets of your idea, then it is time to let your creativity run wild.  Design to your hearts content.  Create the most beautiful mockups, workflows or concept animations as you can.  Often what you create in this stage serves as an inspiration during the rest of your project.  But make sure you have a complete picture before moving on.  Try not to leave any decisions to later down the road, because at that point your mindset would probably settle with the easiest solution, but not necessarily the best solution.  With 15switches, I wanted to get coding as fast as possible, so I did minimal mockup, but I did much more than with previous projects and it helped me tremendously.  Here’s an example 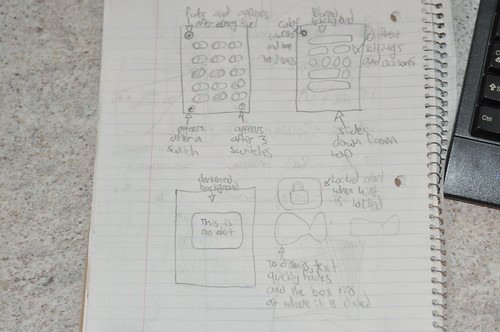 This for me is usually the longest phase by far.  This when you actually start programming your app or executing your business plan.  You need to stay super focused on your goal and set aside plenty of time to complete it, because you can easily put it on the back-burner which will add months to the project and can easily discourage you and might actually cause you to quit. So do not neglect working hard and actually getting stuff done.  For me I made sure that I spent at least a certain amount of time each day doing real work.  I would set goals and deadlines for myself to keep me motivated.  With all that in mind I completed 15switches in a little under two weeks.

Pro Tip: When executing your idea, look for any possible way to improve efficiency and save time.  Even saving just 0:45 sec every time you do something like compile your app quickly adds up.

Hopefully at this point you have created a product worth selling.  Think of unique but effect ways to market your app.  Look back at you demands list, usually these are now major and appealing features in your app.  So prepare graphics that highlight why your app is so appealing.  Then look for audiences to share your app with.  Look on social media, at blogs, at YouTube, at online forums, look anywhere that has an audience for your app and promote it there.  Take any opportunity you can to promote your app.  Even if 97% of your efforts aren’t successful that’s a lot better than the 100% of the shots you miss by not taking them.

6. Bask in the Glory of Your Genius

After you have complete your project, no matter how successful it might seem at first, look back and realize how well your did.  The majority of people have never seen an original idea all the way to the end, so you are to be commended.  If you are upset because you have found minimal success, don’t give up and throw yourself a pity party, pivot your idea and become successful!  Take to heart any feedback you get and never be haughty thinking that your way is right and any proposed change is wrong.  If you adapt your app you will be much more successful, guaranteed.

So those are all the tips I have for making any idea you have into a reality.  Hopefully they’ll help you to keep on creating and completing your creations!

Tweets by noveltyapps
All Posts
Categories